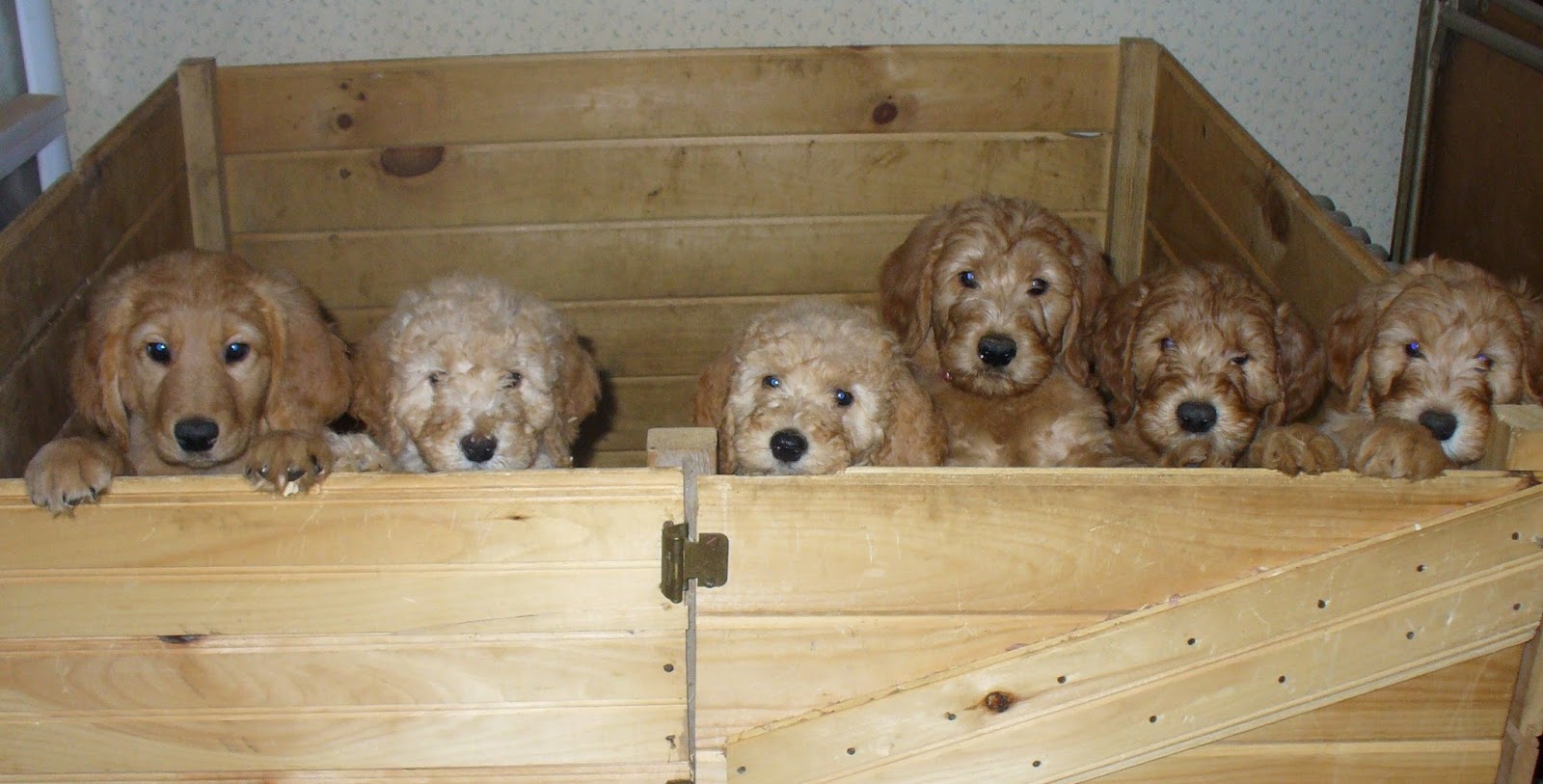 Many people have questions about the different generations and coat types of golden doodles.  On this page, we will dedicate a bit of space to try to take a bit of the mystery and confusion out of these questions.  First of all, I will expain a few golden doodle basics that I have observed over the years:

2. MOST golden doodles coats get more wavy or curly as they mature.  A slightly wavy puppy will often mature to have a nice full wavy or even loose curly coat and a puppy with a loose curly coat will often mature to have a tight curly coat.  Flat coated doodles do not obtain a true doodle coat but stay more like a retriever with a softer, more wavy coat on their backs~and the flat coated puppies almost always shed.

3.  Male vs female golden doodle~Often people ask me the difference between a male and a female dog.  Many people have the preconcieved notion that a female doodle will have better manners and be better behaved.  While this can sometimes be the case, I have not seen a significant difference as a general rule.  A neutered male doodle from good, calm parents can generally be trained to be a very gentle, well mannered dog.  My observation of male vs female doodles is that the females are usually very bright, quick to learn, loyal and affectionate.  Males tend to be smart, but maybe a tad slower to catch on to things, often a bit more laid back and they love their owners with complete abandon.  Females sometimes retain a bit more independence and self-possession, are incredibly bright and are very affectionate and loving. Some people swear by a female dog...while others are set on a male.  We have come to the conclusion that temperament and personality is very puppy specific and not so much gender specific. We have been working on getting the best temperamant and health in our lines for years and most of our dogs all have outstanding temperments and either gender would normally make an ideal pet or therapy for any family.


F1b Golden doodle: (First generation backcross) F1 golden doodle x poodle~The f1b golden doodle has 1 f1 golden doodle parent and 1 purebred poodle parent.  These puppies tend to have wavy to curly coats that are non-shedding and hypo-allergenic.  They are the best for allergy sufferers. They still retain a great deal of hybrid vigour.


Multi-generational golden doodle (or F2b): F1 golden doodle x F1b golden doodle or other generations..but a goldendoodle bred to a goldendoodle
The multi-generational golden doodle has 1 first generation golden doodle parent and 1 2nd generation (f1b-f1 backcross) parent or has two goldendoodle parents from the correct generations and genetic coat coat types (coat type can be tested to ensure the right type of outcome).  These parents should never be related to one another!  The multi-generational litter tends to produce puppies that range in coat type from wavy to moderately curly to very curly.  Our experience has been that the wavy to curly puppies do not shed and are mostly hypo-allergenic. Flat coated puppies can also be produced if the genetic make up of the parents' coats is right for that outcome.  Many breeders do not know or understand this and some also do not have the pedigrees on their goldendoodles to know what they are breeding to one another, but we have both.  Our multi-generational litters have been absolutely gorgeous with a little something for everyone.  They still retain a good deal of hybrid vigour and our puppies from these litters have proven to have wonderful health and longevity as well as amazing temperaments.

All of the following pictures are from multi-generational litters from the same two parents.  These puppies are from several different litters during the span of the dam's breeding years: 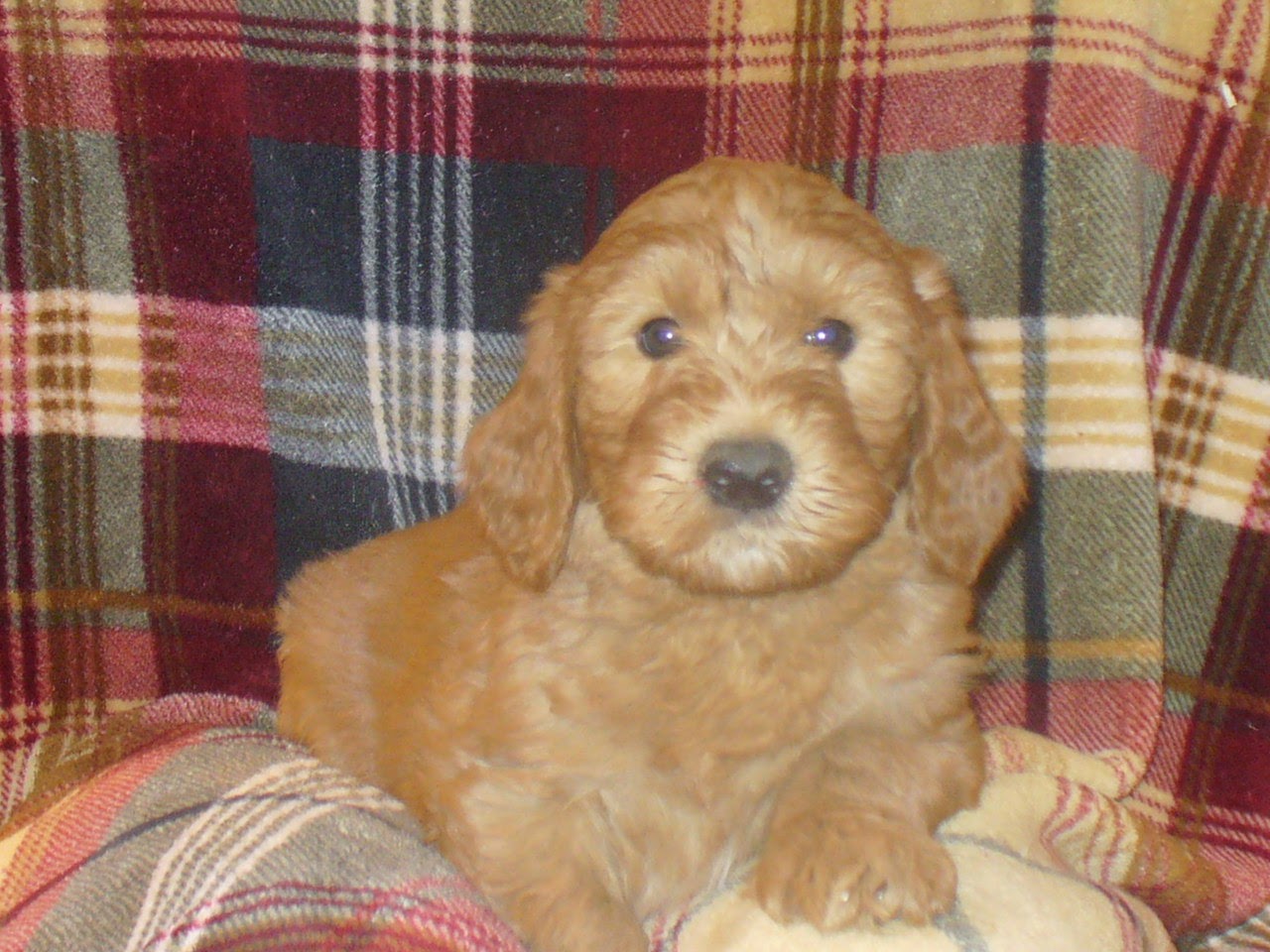 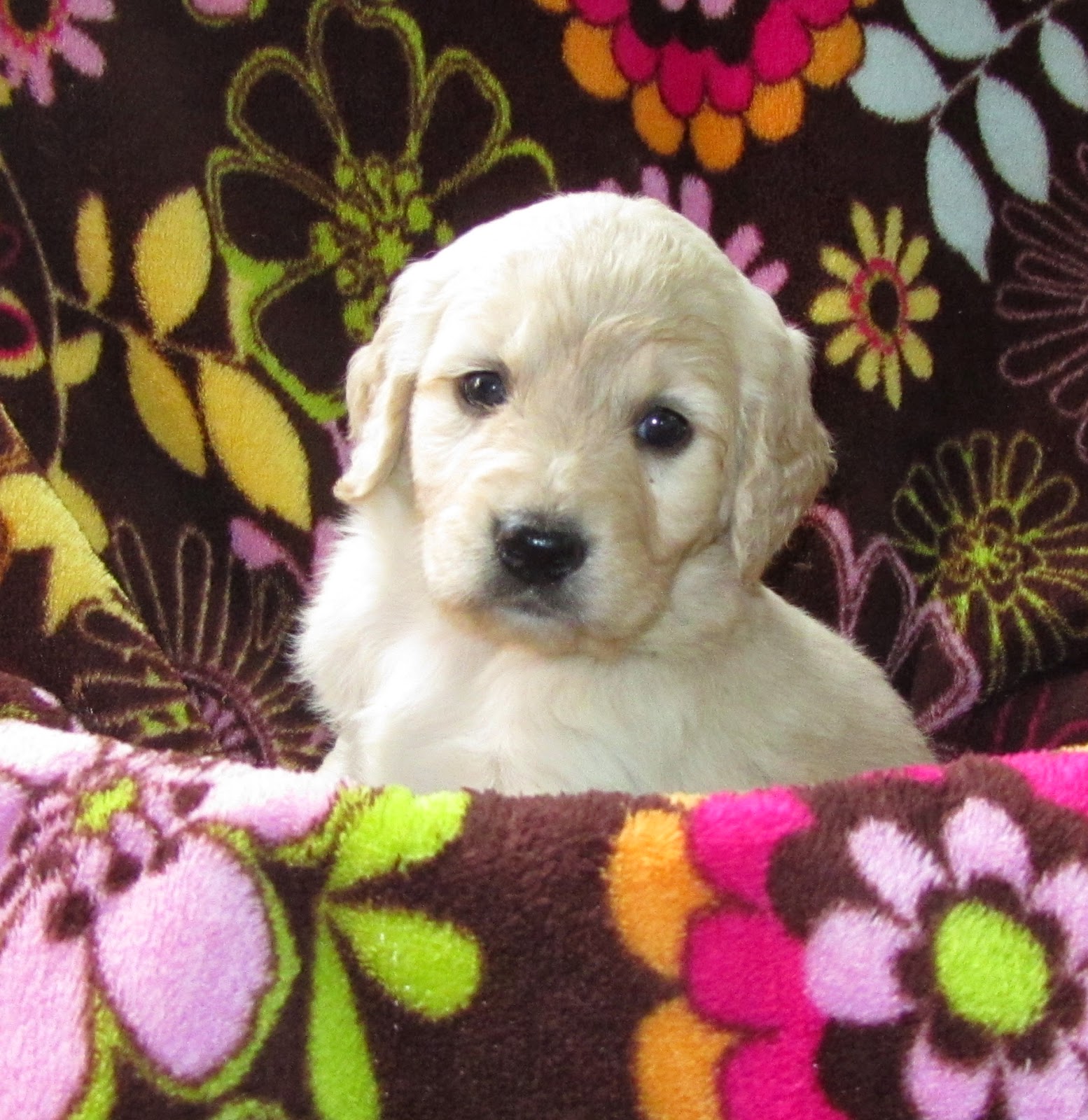 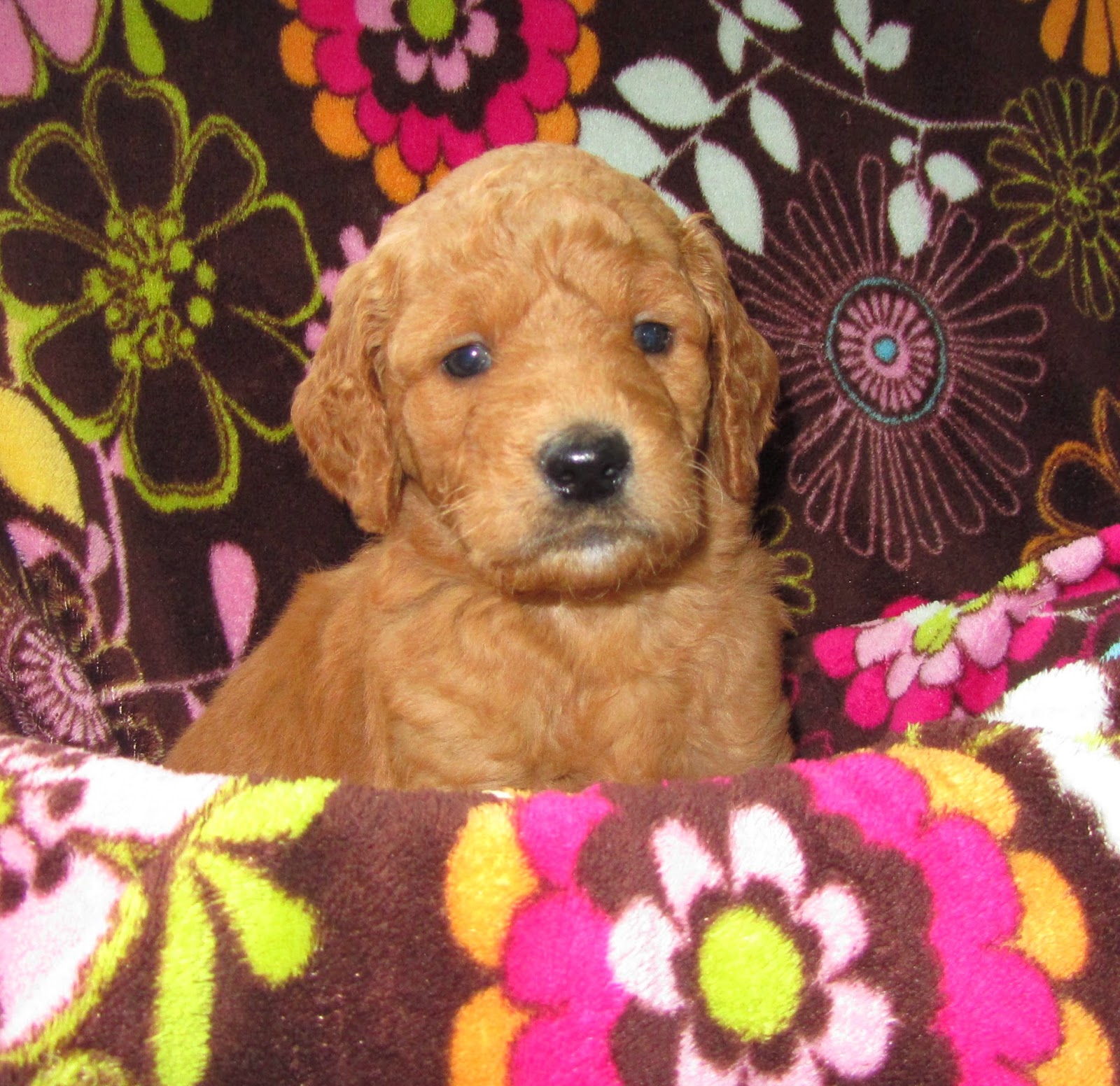 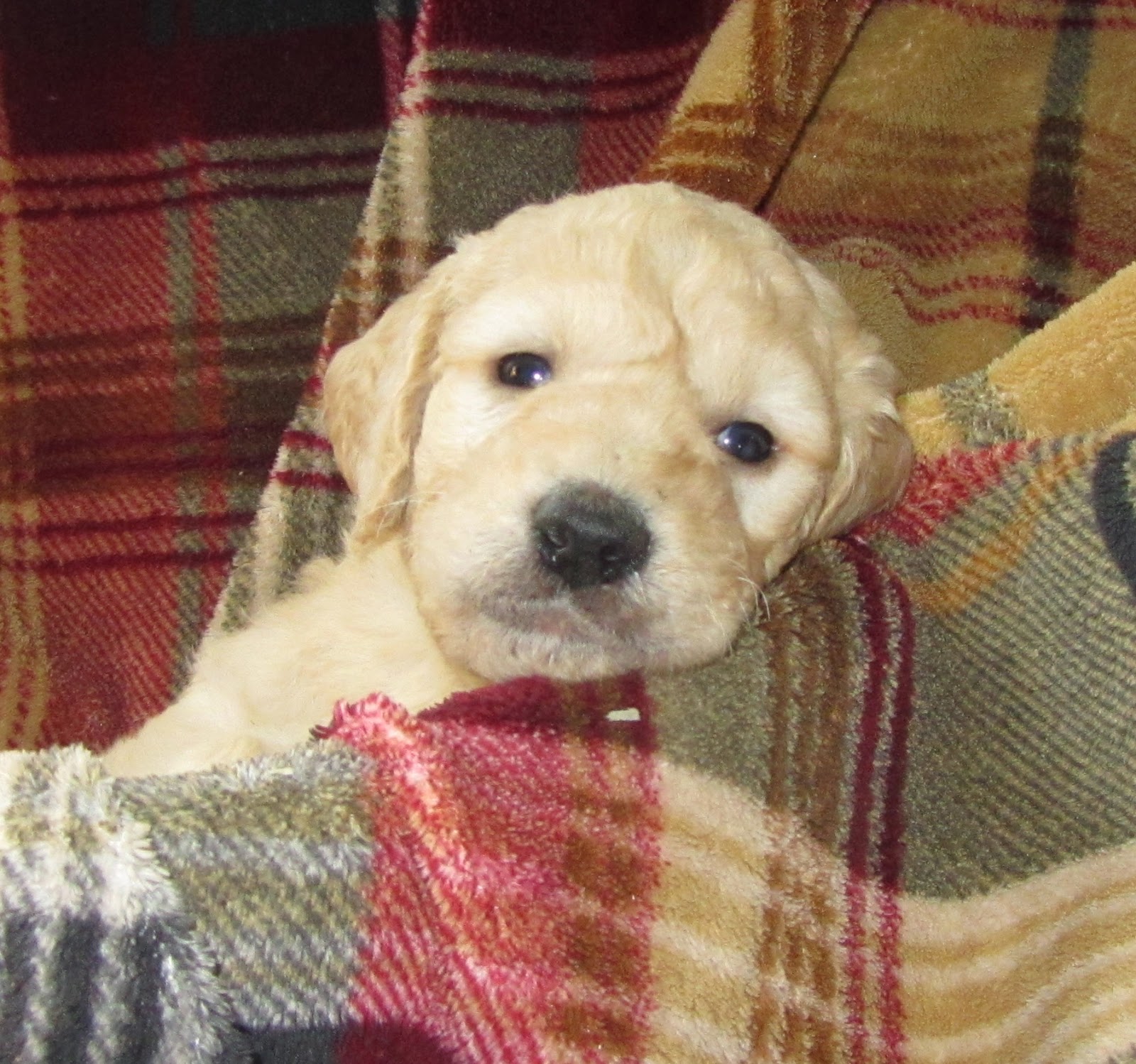 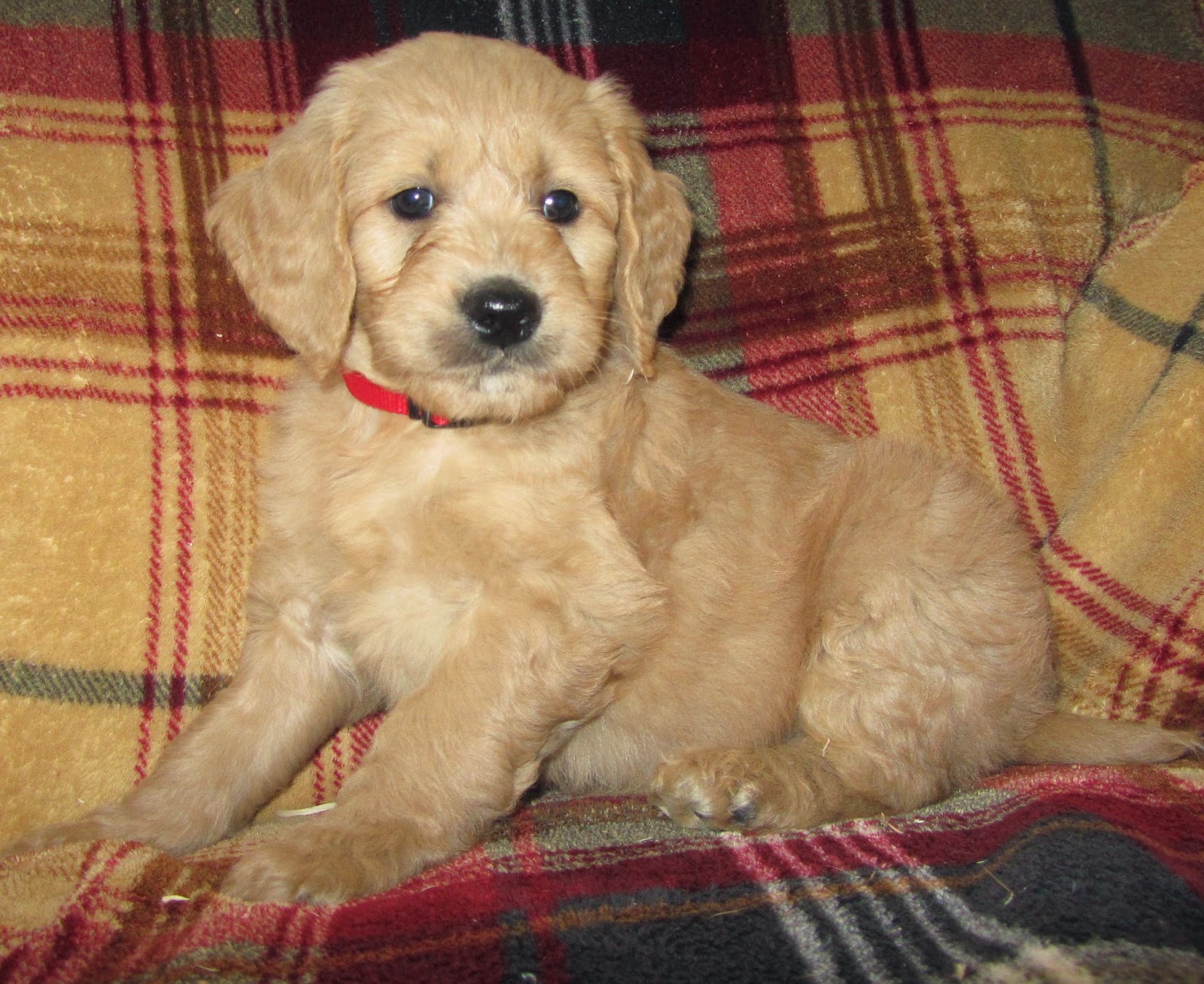 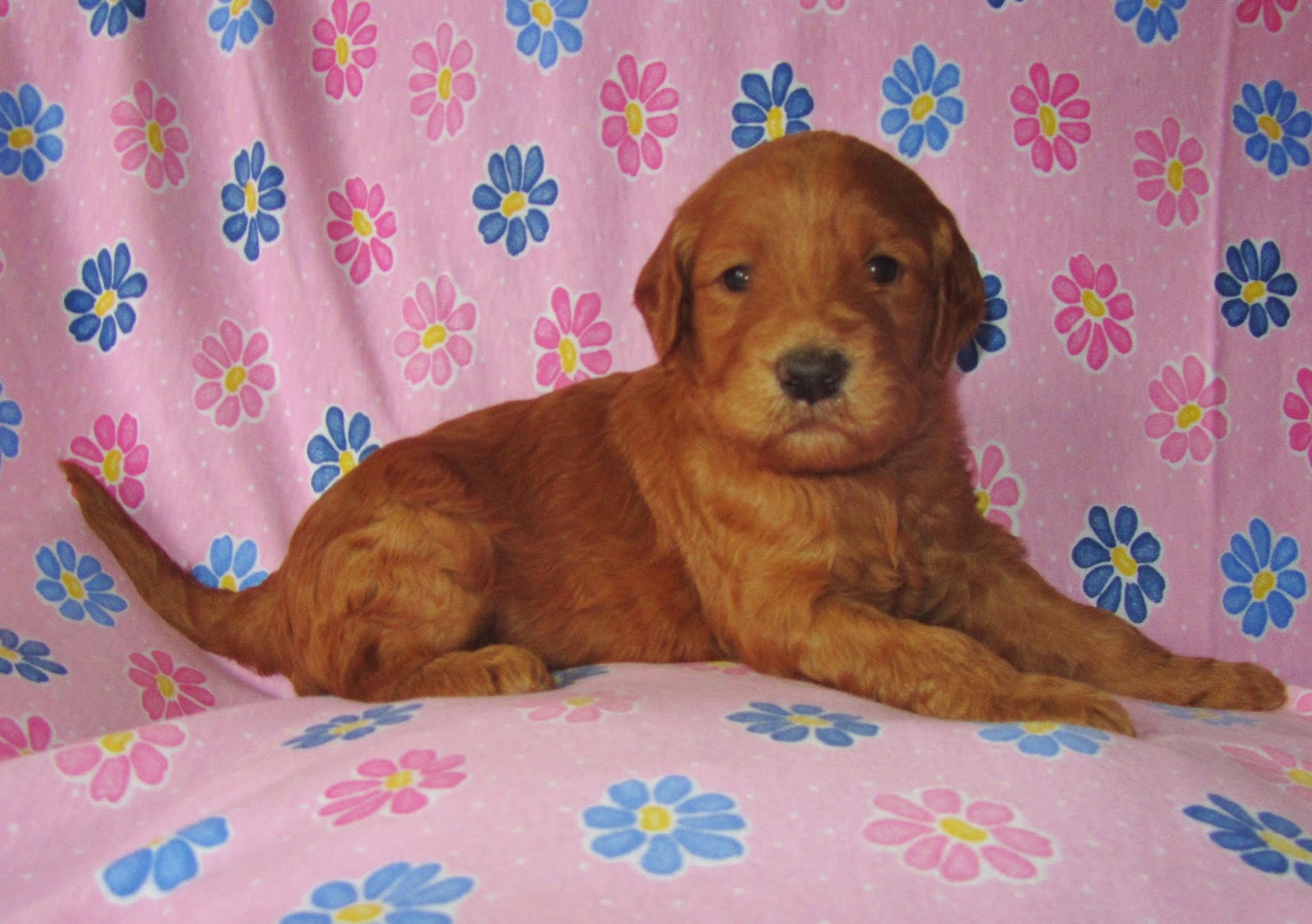 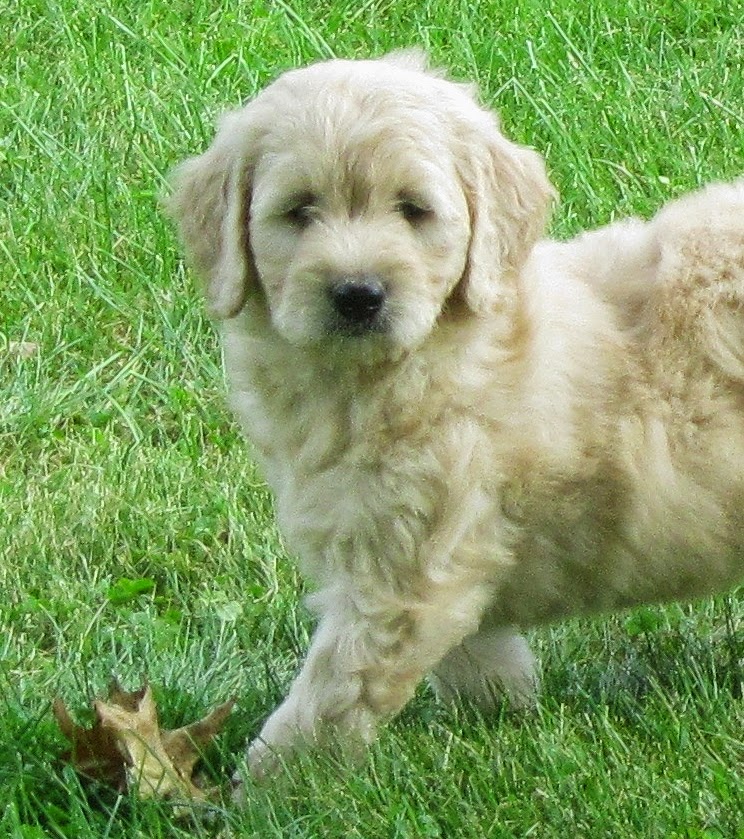 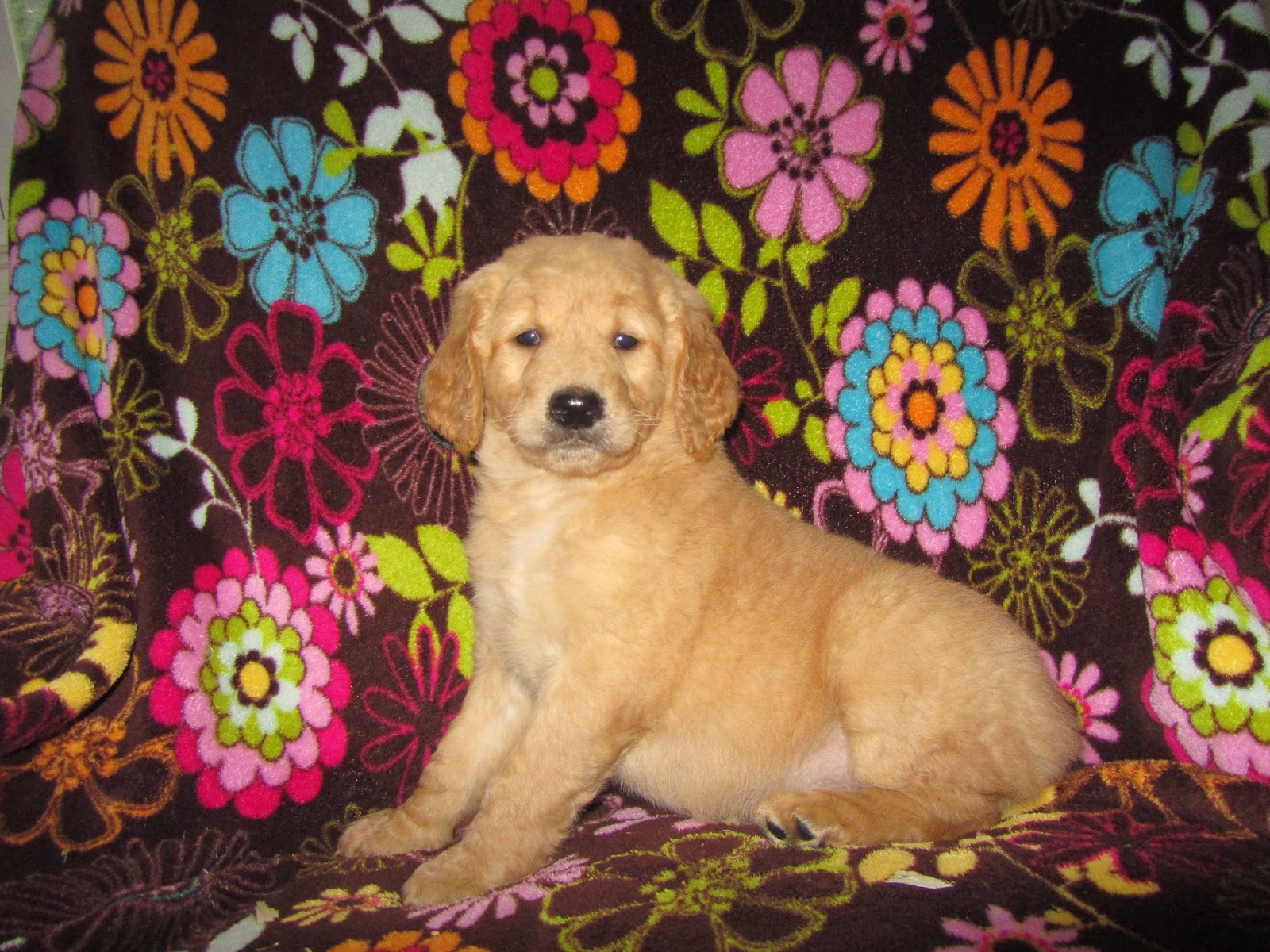 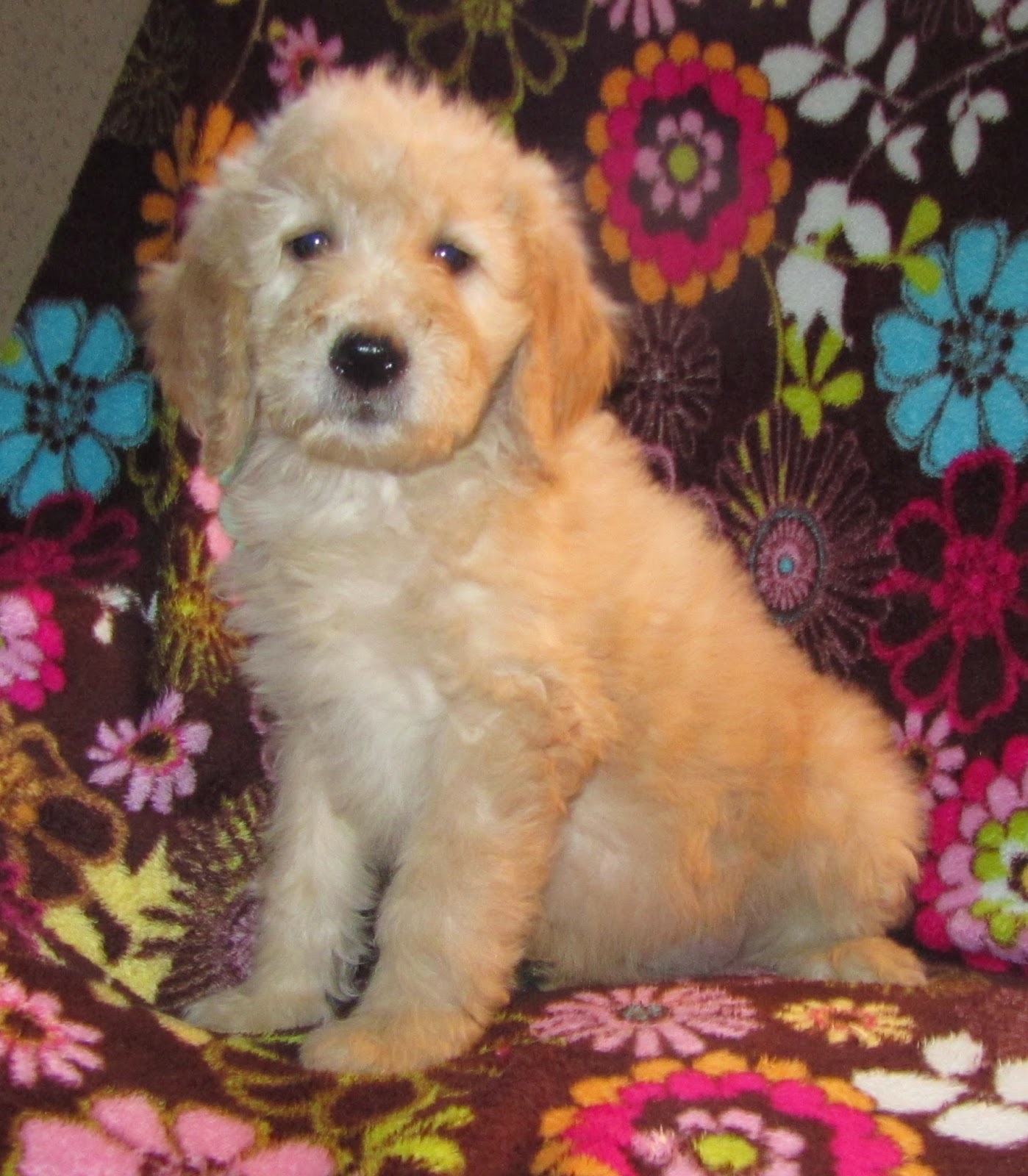 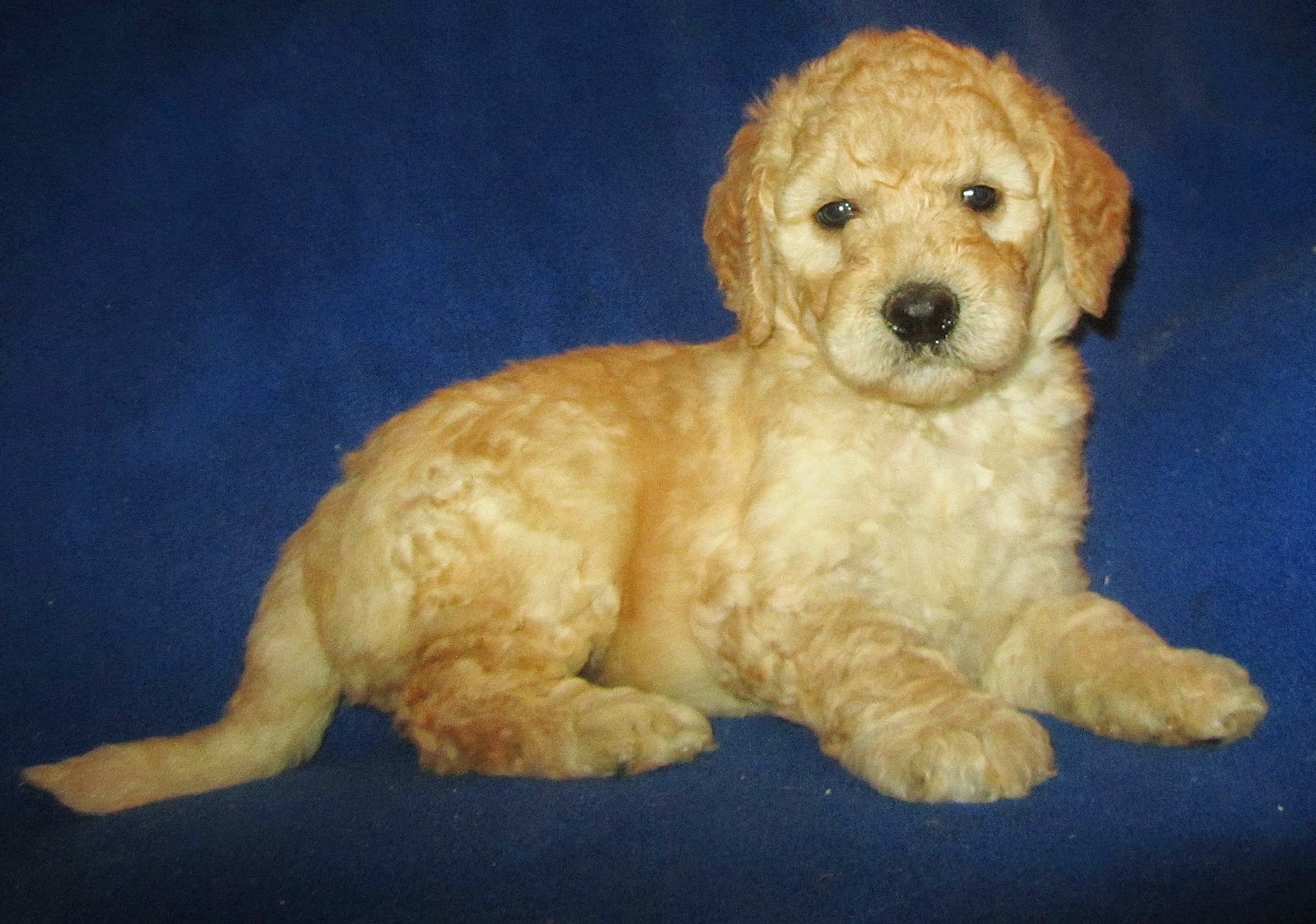 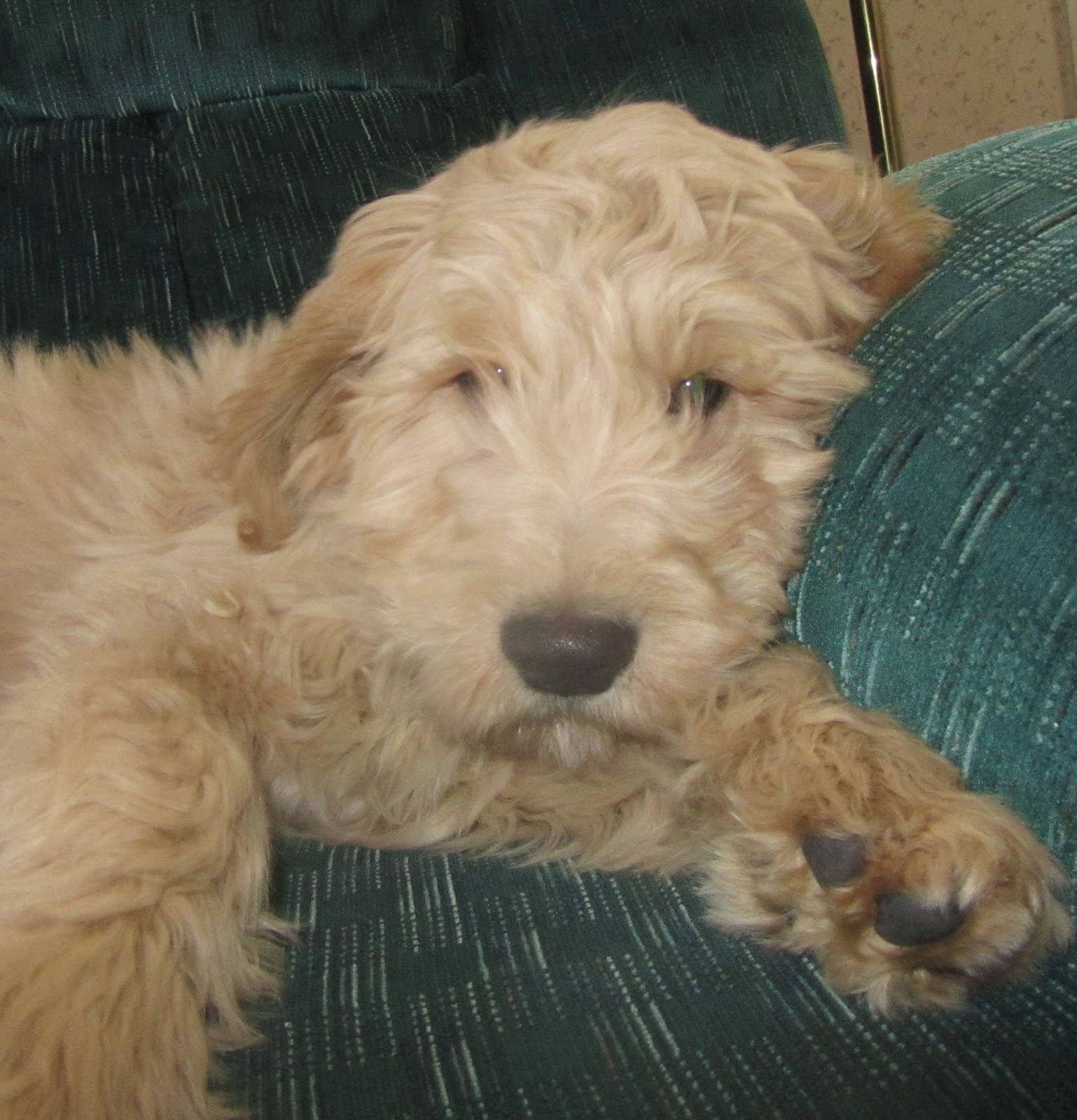 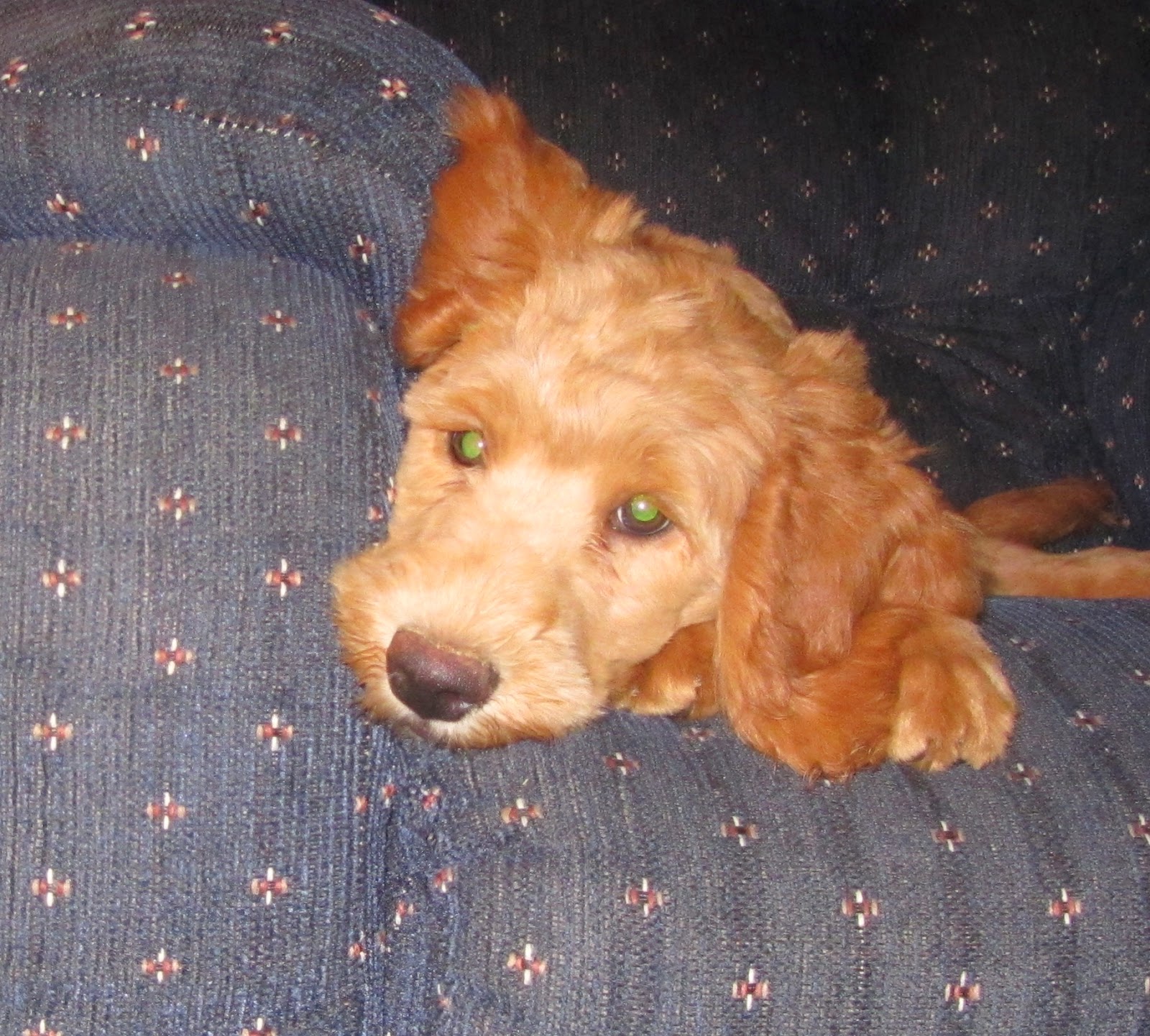 F1bb Golden doodle: F1b golden doodle x purebred poodle (Sometimes also referred to as an f2b)  This generation generally ends up being wavy to very curly and basically guaranteed to be non~shedding and allergy friendly.  Therefore, for someone with severe allergy issues or extreme adversion to shedding of any type~they are a good choice.  Genetically, they have the same type of coat as a F1b...some are wavy and some are curly.  Most tend to not shed. They do retain some of the retreiver characteristics in personality and looks.
All of the follwing puppies are F1bb puppies from breedings that have been done here... 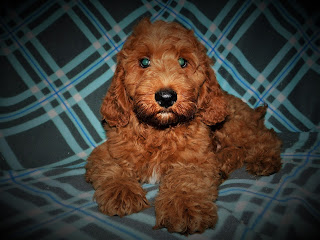 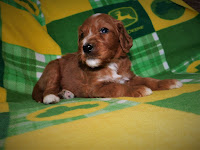 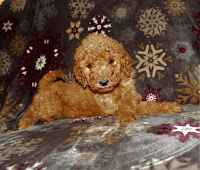 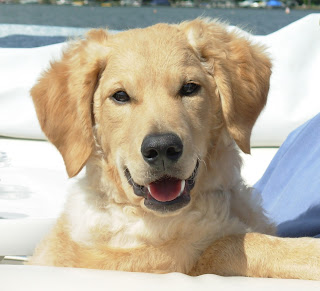 The puppies below are flat coated puppies that have been born here over the years...